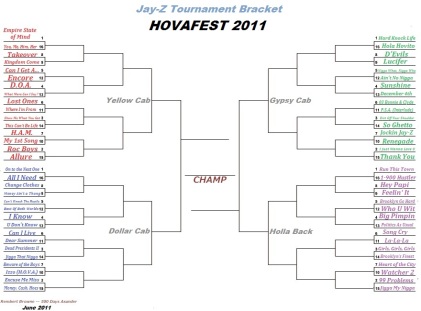 Yeah.  When it’s time to nerd out on rap music, why not go all the way?  Rembert Brown organized all the Jay-Z tunes based on youtube views.  Then he judges each soundclash.  Check him out in the second round contrasting two songs from the Black album.

Dirt Off Your Shoulder (3) vs. Public Service Announcement (Interlude) (11): You hate to see the intra-album battle. While both are good, there is a glaring difference between the two songs. I think a number of people could have rapped over that insane Timbo beat and had a hit with Dirt Off Your Shoulder. Ludacris, easily. Lupe maybe. Joe Budden, why not? NO ONE ON EARTH/MARS/PANDORA could pull of P.S.A. other than Jay-Z. You can’t say, “Allow me to reintroduce myself, my name is WAKA.” I promise you can’t. P.S.A. is so Jay-Z, it hurts. Example of how insane the song is, a few weeks back a DJ turned on the beginning of P.S.A., thereby alerting the listener that they have 22 seconds to get in position. With about 7 seconds left before the explosion, 5 people stopped their conversations outside the bar and ran inside, simply to scream HOV at the top of their lungs. I was one of those 5 people. I’m always one of those 5 people.