Performing arguments: The Roots . . . And then you shoot your cousin

Okayplayer has a slightly obtuse review of the live performance of The Roots new album.  The album is called . . . And then you shoot your cousin.  Here is a snippet from the review by Eddie “Stats” which highlights the use of performance to make some interesting arguments:

Questlove is at the decks now and as the lights strobe a massive avalanche of balloon animals suddenly falls on the stage, a Jeff Koons flood of meaningless forms, falling in the framedrop slo-mo created by the flash of the strobe. A doo-ragged character enters the stage, humming, holding a gigantic red balloon like a kite. There’s something clownish in his dancerly movements, he has his mouth absurdly open, recalling at once a mime, Flavor Flav in wop-mode, the broom-wielding enforcer of the Apollo as he sweeps balloons away in the wake of his feet. In silence his dance picks up in intensity and his movements resemble Flav less than legendary b-boy choreographer Pee Wee Danz. As he steps and swims through balloons, the pop of dying inflatables echo like gunshots. We are fully in Fluxus territory now, improvisation colliding with a wickeder kind of randomness to create an ‘anything could happen’ tension in the room.

via The Roots chop up their new LP into art live (photos + recap) Okayplayer. 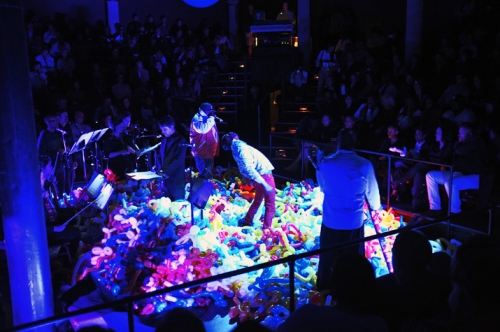 The Roots performing live among some balloon animals. Photo by Mel D. Cole taken with respect from Okayplayer.

I’m completely feeling three arguments from Robin James at Cyborgology about the indignation over the Robin Thicke/Miley Cyrus VMA performance.

1. White indignation is a way to self-identify as better-than.

What are we supposed to find likeable in all this? If the aim of the performance is trolling, then we’re not supposed to find it likeable, but irritating and infuriating. I wonder if, in a particularly insidious way, we white people/white feminists are supposed to like what we think is our righteous outrage at the performance? It’s insidious because what is felt (and often intended, at least superficially) as a performance of anti-racist outrage actually further cements our privilege vis-a-vis white supremacist patriarchy? Sharing the pics and gifs of black artists’ reaction shots (the Smith family, Rihanna, Drake), and all the positive feedback we get from this, tells us that we’re “good” white feminists? And this knowledge of our goodness is what we’re liking and aesthetically enjoying? (I’m phrasing these points as questions because they’re genuinely hypotheses–they seem right, but maybe I’m overlooking something?)

via Trolling Is the New Love & Theft » Cyborgology.

No, you are not overlooking something.

2.   James also argues that new media enables sexist and racist communications to be quantified and amplified through critique via social media commentary and thus sanitized.

But today, in what we tell ourselves is a post-feminist, post-racist society, perhaps the way to dis-identify with the neoliberal mainstream is to identify with the objects of its disdain: sexism and racism. As before, the dis-identification with the mainstream is an attempt to prove one’s elite status above that mainstream. This eliteness isn’t conceived or expressed as vanguardism (being ahead of the pack), but as human capital, often quantifiable in/on social media. It’s not who’s most shocking, but who’s trending most on twitter the day after the VMAs, for example. Just think about the way Thicke’s “Blurred Lines” performances constantly throws #THICKE up on some screen.

via Trolling Is the New Love & Theft » Cyborgology.

3.  The best point James makes is framing this kind of cultural appropriation + rape supportive culture + toxic corporate media garbage to be a form of trolling.  Pushing our buttons in order to get more attention.  Now, this is a smart argument — it gives a way to better understand the reasons why Thicke’s rape song and Cyrus’ twerking are bothersome.

I also think it might point to a kind of consumptive desire in the audience not only to distinguish themselves through mockery, but also to desire to view and replay the suffering of the mocked.

I especially like the idea of not talking down to kids.  I guess there could be some perception of a mockery of Becket and philosophical/abstract plays.  But if your snide-upper-class-host-of-a-public television show is played by COOKIE MONSTER maybe you are the one being mocked.

How badass is it that the character who never arrives is the mass marketed Sesame Street super star Elmo?