December 21, 2012 Arcata CA.  A showdown where the story of the end-of-the-world met six DJs who used real records to ground a party to this earth.  A brief accounting of the participants from my simple perspective. 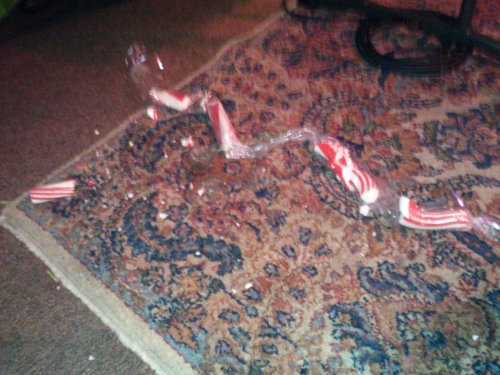 The first DJ of the night was perhaps the most adventurous DJ in Humboldt county — Spaceman Spliff who not only killed his set, but dropped a Cure song to knock out small-minded fools.  Mantease played pretty hard and seems to be bringing more soul-inspired global stuff.  But it was his afrobeat shit that get’s me the most hype, and since I spent half the sent dancing on the side of the stage, that was pretty obvious. Matt “Skinny Santa” Jackson and Adam “ugly ass sweater” certainly brought the heaters.  “Back door Santa” got played and it took about half of the first verse before people clued in, then the dance floor got nasty.  And of course, the E.L. Michaels Wu-Tang song, another Soul Night first.  And I’m not talking about Skinny Santa smashing his giant candy cane across the chest of his DJ partner (saint Ad-rock), but a couple hundred people chanting “Wu-Tang!”.  I looked at Jay Morg’s set before he took the stage and I knew that he was coming with some great dancing records.  I wasn’t surprised that he gave one of the best sets of back-to-back dance floor jams that any of us have thrown and the people were feeeeeeling it. Not to mention the dude rocking a purple velour jump suit.  I had to slow it down to gospel speed just to give people a chance to catch their breath when I took over for the final shift. 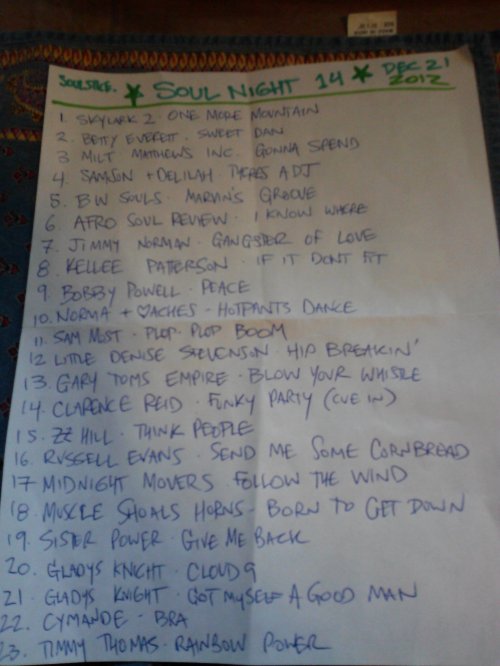 I played the above set.  It was an incredible blessing to be able to look out as a simple music nerd and see hundreds of people dancing to the flute jazz jam by Sam Most. Not to mention the appreciation and respect for the good sounds.  Thanks to all the wonderful people who buy tickets and who support Soul Night.  Thanks to La Dolce Video who provide an astounding cinema backdrop for the party.  And much thanks to Humboldt Brews for the nice venue, respectful door staff, good sound guy, great bartenders, and generous dancing space.

Next soul night is January 18, expect the ridiculous.  If you are in Humboldt and want to join Matt, Adam & King Maxwell for a soulful New Years Eve at the Siren’s Song a few tickets are left at the Missing Link.